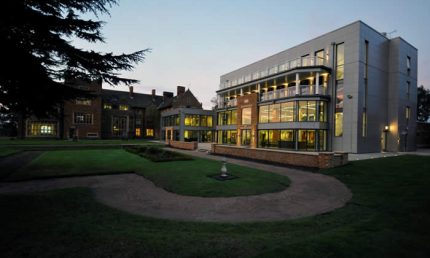 The creation of this new Sports Centre, aids the development of generations of students

The sports hall building is a steel frame construction with precast concrete floors. Vibro piling and grouting were used to combat the poor ground conditions, typical for the area due to the history of mining in the region. The site itself is set on an old colliery mine.

The hall contains space for four badminton courts and a full-size basketball court. Space for netball and handball courts were also created as an additional instruction from the academy. .

A new fitness suite packed with modern gym equipment was also installed alongside changing rooms. Staff use the gym area in lessons teaching children about healthy living and keeping fit.

This development has brought much needed new facilities after the existing sports hall and changing rooms suffered severe water damage in recent years, incurring thousands of pounds of running repairs.

We have carried on the success of our previous involvement with Holly Hall Academy where we constructed a new teaching block. From 2014 the academy run the ‘Deeley Sports Personality of the Year’ for outstanding students following a donation by Deeley to the academy.

"I write on behalf of the students, staff, Governors and parents of The Holly Hall Academy to express our gratitude and thanks for the outstanding manner in which our Sports Centre has been built.

"We opened the Centre to students on Monday 28th April 2014 and the delight and amazement on their faces as they experienced their new facilities for the first time was a joy to behold.

"Your site manager, was outstanding throughout the project and I cannot speak highly enough of the way he managed the project and developed a close working relationship with the Academy.

"The rest of the team, and particularly Keith Bird, were also excellent through. Deeley's built our Technology Suite in 2005 and so we knew we would receive good services, but this project has been outstanding and is a great credit to the people you employ.

"Thank you once again for delivering such an outstanding facility for us and i hope we have the opportunity to work together again in the future."